Even a small decrease in material consumption and build time can have a large impact on production expense and throughput.
B
Written by Bud Runquist
Updated over a week ago

Optimizing performance becomes increasingly important as a project moves from prototype application to direct digital manufacturing (DDM). With larger production quantities, even a small decrease in material consumption and build time can have a large impact on production expense and throughput.

With a few minor adjustments to the default parameters for FDM supports, DDM applications can have times and material volumes cut in half. And since the methods are so simple to apply, it is just as easy to save time and money on the prototypes made for product development. 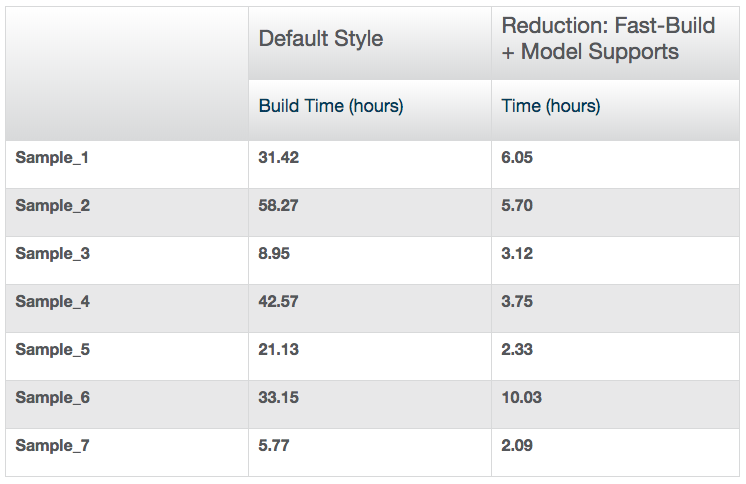 Select the SupportSparse template and save it as a new custom group named SupportFast.

Change the Air Gap between adjacent rasters to 0.79 inch (20.0 mm). Also, adjust the Start Angle to make it perpendicular to that used in the SupportSparse group. For example, with ABS-M30 and a T16 tip, the Start Angle would be set to 150 degrees. Next, set the Delta Angle to zero degrees and check the box for Align Rasters.

The ten–layer region acts as a buffer zone that ensures that all faces of the model are properly supported. At the transition between SupportFast and SupportSparse, the raster will sag because of the larger air gap. This sag lessens with each subsequent layer. By the tenth layer, the sag is eliminated, which provides a fl at contour for the subsequent support material curves.

Method 2: Supports Made from Model Material

Another alternative to decrease build time is to substitute model material, such as ABS–M30, for the support material. Making both the model and support from a single material eliminates the lag when switching between materials. If combined with the Fast–Build supports method, build times can be reduced by as much as 40 percent.

This method is simple to implement. However, it is not applicable for every FDM part. To be effective, all supports on a given layer must be made from model material. Also, the geometry of the supports must be such that they are not captured by the part. Although the WaterWorks™ support zone allows the support to release from the part’s surface, removal will be difficult if the model or supports surround each another.

Select the SupportSparse template and save it as a new custom group named SupportModel. The only parameter to adjust is Toolpath Material. Set this option to “model”.

Optionally, SupportModel can be combined with the Fast-Build method described above. To use this option, add a custom group named SupportFastModel. Use all of the parameters for SupportFast but set the Toolpath Material to be “model.”

Both SupportModel and SupportFastModel are applied to any support material curves that are three or more layers from the SupportFace curves. This two–layer boundary of soluble support material allows the supports to separate from the part when submersed in the WaterWorks solution.

Did this answer your question?